Here we go again. Last week, I posted about some half baked query results about the runs scored and runs allowed ranking of World Series winners. Since that time, I’ve built them out to a useful amount and added some more info based on feedback. Today, I’m going to focus entirely on that data.

At the time I gathered the data, there had been 15064 completed seasons.  For each of those seasons, I looked at the rank of the World Series winning team in runs scored and runs allowed.  1 being the best in the league that season, 24 being the worst in the league

Since I know everybody here loves numbers, here is a wall of them. 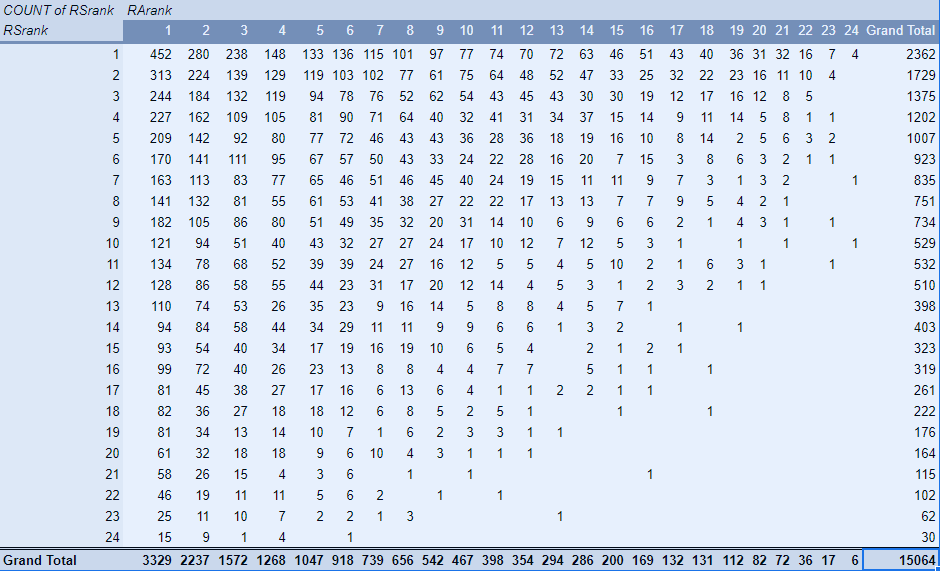 1074 times a team has finished the regular season ranked 1st in both scoring and prevention. 452 of those times (42%), that team has won the WS. Obviously, that means 58% of the time, that team does not win the WS. Here are the 622 teams that were excellent but did not finish the job.

Using this to determine how well balanced teams have performed in the playoffs is trickier than I’d like.  A team ranked in the top 3 for both ranks has won 14.6% of World Series.  But, each season could have 0 to 3 teams ranked in the top 3 for the regular season.  I haven’t taken a statistics class in a long time and this is out of my yahtzee sized stats brain.

But teams that are ranked in the top 8 of both categories have won 49% of all World Series, so I’d half heartedly conclude that being decent in both categories is smart.

Teams that rank in the bottom half of the league in both categories have won only 50 titles (0.33%) in the historical data.  It’s hard to make the playoffs like that and even harder to win a title. If I bump it up a bit to both ranks being out of the top 10, it’s still only 1.2% (195 titles).

For all the outliers, you can find the specific teams in the Record forum thread. These are mostly those near .500 teams that squeaked through a weak division and got hot. It can happen. And if I play enough rounds of golf, I will get a hole in one. Or perhaps, since it takes 12 wins to get a title, a better analogy would be bowling. And today’s random fact, if the internet is to be believed… The lowest average for bowler to get a 300 game, 112.